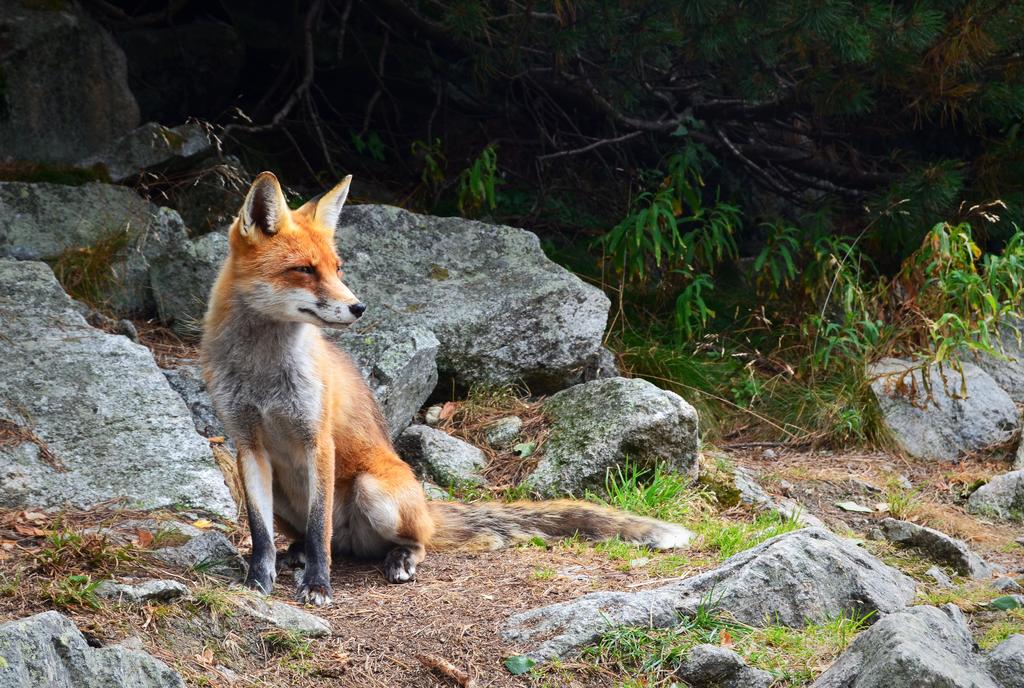 I previously mentioned the spreadsheet tool sc in my text-mode overview, noting that it deserved a separate post. It is one of the oldest spreadsheet programs around, maybe even the oldest still in use today. (The date examples in the documentation are all from the 1970s, for what it’s worth.)

sc was originally written by James Gosling, who later went on to create the programming language Java. Like any sufficiently old piece of software, development is spread across a handful of forks. There’s at least three direct forks that I can find, as well as derivative versions like sc-im. There also exists a graphical frontend for X11/Athena called Xspread, but I can no longer find anything resembling a home page for it, and distros seem to have dropped the package. (It didn’t offer much that sc didn’t, anyway.)

sc has a rather steep learning curve, especially for those not already passingly familiar with vi-style editing. If you’re expecting a terminal equivalent of Excel (or OpenOffice, or LibreOffice, or whatever its name is this year), you will likely be disappointed. Moreover, while it adopts many of vi‘s principles, only the most basic keystrokes work similarly; it is quite a different animal. That is, Excel is a dog, vi is a cat, and sc is a fox. Hope that’s clear.

For heavy command-line users, it’s worth the effort to learn, and fortunately it also comes with plenty of resources to help, including a well-written manual page, a detailed tutorial, and an interactive quick-reference help system. This might be surprising to those used to modern software, but back in The Day, programs generally came with good documentation.

I should also point out, by the way, that I am only covering sc here, and not sc-im, which has been extensively modified to act much more “vimmy” — for example, changing the W key to :w. For what it’s worth, I think sc has a friendlier help system for new users, as it’s concisely broken into quickly-accessible pages, e.g. ?h displays the row and column commands. sc-im looks nicer, though, and might feel a little more familiar to vim aficionados, but it has a few differences I just can’t get past. If you’re interested, give both a try and see which you prefer.

Here’s a handy cheat sheet for some basic tasks:

If you’re familiar with Excel, you might want to add the following to your ~/.scrc file:

This will enable the familiar behavior of automatically switching to insert mode when you type a number, and advancing the cursor to the next row down when you press Enter. This auto-insert only works for numbers, though, since most of the other keys are taken by vi-style commands.

Numeric expressions, formulas, and ranges also work much like Excel, but row numbering starts at 0, and functions are preceded with an @ symbol, e.g. @sum(A0:A20). Also: a cell can contain both a number and a label, which confused the heck out of me when I was first learning.

A common task when working with spreadsheets is to fill a block of cells with a value, or a formula (with the row/column references adjusted correspondingly). To do this, enter the value you want in the first cell. Then, with the cursor over that cell, type c. – that’s c followed by a period – move the cursor around to select the range to fill in, and hit enter.

Alternately, to fill a block with different values, first type rf (for range fill), select the block, hit colon or tab to switch to command entry mode, and type the start and increment. For example, rf9j:3 3 fills the first few cells in column A with multiples of three. (For those unfamiliar with vi notation, 9j there means “move down nine times”.)

Another often-used range function is sorting; rs (range sort) does that. If you just want to sort ascending by the first column in your range, you’re in luck, because that’s all you need to remember. Just select visually and hit enter, and presto, it’s sorted. Otherwise, the incantation is a little bit on the esoteric side. I learn best from examples, so here’s a few:

The sort criteria is a text value with three pieces: the order (+ for ascending, - for descending), which kind of value to look at (# for numeric, $ for text), and the column to sort.

Pressing ‘f’ shifts to a format setup mode, which has its own key map. Formats configured this way apply to the entire column, which is generally what you want.

The predefined formats most likely to be useful for basic tasks are 0 (general number) and either 3 or 4 (dates). Format 4 uses four-digit years, which is usually a good idea, but in a console where screen space is scarce, sometimes shorter is better.

Setting a custom format is somewhat weird: press f=, enter the number for the format you want to set, and then write the format string. (If you don’t have set numeric enabled, you can also hit enter and type the commands directly, and use the arrow keys to get to history items. This is nice for experimenting with formats.) For an example, this configures slot 7:

… as a “currency” type, which puts a dollar sign before the value and uses the default field precision.

Custom date formats are similar, though it’s a bit of a hack as the indicator of a date format is a literal Ctrl-D character. (Yes, it’s weird.) Dates, by the way, are stored in predictable Unix fashion as time_t values, and are formatted with strftime(). Since formats 3 and 4 are already preset for dates, let’s keep all the time values together and define 5 and 6 for a date-time and time, respectively:

(^D here denotes pressing Ctrl-D.) The %-codes are the same as strftime.

If you’d like to keep these formats permanently, you can put the commands right into your ~/.scrc just like they were formatted. You’ll have to take care with date formats though, because they do need that literal Ctrl-D character.

Fortunately, sc isn’t quite arcane enough to make you write all your dates as time_t values for them to show up properly; there are a few other ways of expressing the date and time. First and probably most useful, a value like 2016.8.12 will be parsed as a date. (Note that the year needs to be four digits.) This is permuted upon entry into @dts(2016,8,12), which is a formula that spits out the time_t for midnight on that date. There’s a similar @tts function for writing time values – and you can even add the two together if you want to define a date and time. It’s a bit awkward, but hey, it works, and the scaffolding makes a lot more sense than Excel’s weird decimal numbers.

sc admittedly isn’t the prettiest program, either, but if you put set color in your ~/.scrc, you can at the very least use a handful of alternate color combinations, and even set some of your own. Try entering a bunch of data, move to the top, and press rC (range Colors), select a block, then hit colon and the number of the color you’d like. Or rather, it’s a color pair, a somewhat awkward concept that got inherited from curses, but the point is, each number is a cell style.

The defaults, though, are butt ugly: 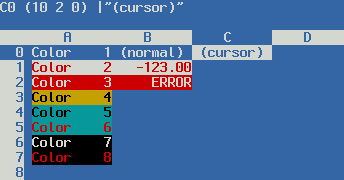 If you want less gross colors, check out the manpage and edit ~/.scrc accordingly.

There’s a couple other color-related settings you might be interested in. set colorneg increments the color value by one if the value in the cell is negative – in other words, if a cell is using the default color 1, negative numbers will display in color 2 instead. There’s also set colorerr, which highlights formula errors in color 3. I use both of these, and generally set colors 4-8 for headers and various other cells that deserve some sort of attention, much like one might use bold or italic text.

One last feature I will cover is framed ranges. This is a way to define cells that “stick” when the spreadsheet scrolls, and in its basic form, a framed range is roughly like Excel’s “freeze” feature. I find it most useful to use the command line to define these, especially for larger frames, but you can also select the ranges interactively if you prefer by typing rra. Either way, the syntax is:

where outrange and inrange are both ranges, e.g. A0:D50. Supposing you’d like to have a “header” of column A and row 0 that stays on the screen all the time, for the whole sheet. In this case, your outrange would be A0:Z199 (or however far you want to extend it — I don’t think it’s possible to say “the whole spreadsheet” here), and inrange would correspondingly be B1:Z199. So the final syntax for this setup would be:

… thus effectively locking the first row and first column so long as the cursor is inside the inner range that you’ve defined. Frames can do a lot, but this basic usage is sufficient for most of my needs, and probably for yours as well.

There’s a lot more under the hood, especially if you take the time to get to learn all the little nuances of how things work. It is worth spending a weekend sifting through the documentation and experimenting with all the commands. The range commands and row/column commands are especially worth giving some attention.

Lastly, I should point out one important point about security: sc provides multiple ways to embed the execution of arbitrary commands into a spreadsheet. This can be powerful, but with great power comes great responsibility — don’t just blindly load random spreadsheets you found on the internet! (I considered making an example spreadsheet to accompany this article, but decided against it for this reason.)

If you liked this, consider backing my Patreon!